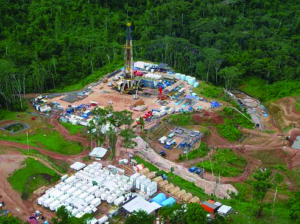 Making its way along Peru’s Lower Urabamba River, a jaguar’s whispery black shape easily tangles with the darkness of nearby vegetation. Below the tree canopy, two parallel curves of the dual pipelines shoot into the surrounding Amazon, making their way through the jungle, far past where the big cat will wander and perhaps find its prey. Along the tree canopy, equipment dangles from tethered lines. All of the equipment needed for this massive project is flown in and lowered from the sky onto hilltop clearings.

Facing one of the greatest pipeline challenges in Peruvian history, ISI Solutions, the system integrator for the project, knew the application needed to rely on a cost-effective automation solution that combined the power of control and flow computers to integrate, operate, and maintain pipeline control. The pipeline company needed an internationally recognized name-brand solution with local distribution. They needed a product line that would enable complex control over a Peruvian pipeline where failure to provide much needed natural gas and natural gas liquid could mean dire consequences for the Peruvian economy.

The answer came when ISI discovered a simple solution: ProSoft Technology had a Flow Computer that was compatible with Rockwell Automation’s ControlLogix® platform. As an in-rack solution, it could easily plug into the Rockwell Automation® backplane.

An electrical engineer for ISI Solutions tested the ControlLogix platform with ProSoft Technology’s in-rack flow computer communicating with the backplane. He found such integration and compatibility a huge plus versus utilizing a stand-alone flow computer that might have provided a similar service.

Since ISI Solutions is a system integration company that provides consulting, integration, and management solutions for a multitude of pipeline-related projects, finding an automation solution meant choosing a product line that they knew was going to work.

“We recommended the use of a Rockwell platform early on as we wanted to add a highly functional backplane and flow computer,” said ISI Solutions’ electrical engineer. “The challenges were significant. The customer’s pipelines needed flow management control with a solution that could fit the Allen-Bradley® backplane. What really made the Rockwell platform functional for the end user was ProSoft Technology’s involvement in solving their flow computer needs with their in-rack flow computer module.

“Implementation of products such as these are just part of standard development,” the engineer explained. “We design pipelines, then program, then test; then we start up. This is just the way we do things. If you want professional quality on a pipeline such as this one, then you really have to make sure the technology fits the needs of the project.”

How the application is set up

The pipeline SCADA system has two control centers in local cities. One will be used in case of a major problem at the MCC location, or interruption of communications to the MCC.

Local control systems will control both pipelines and bring information to the SCADA Host system at the control centers to supervise those pipelines and their associated facilities: receiving, pumping, scraping, and block valve stations.

Since both pipelines run parallel and close to each other for 550 km, in many instances they will share a common local control system (i.e.: A common RTU or PLC). Local control systems will be implemented with PACs from Rockwell Automation.

The ISI Solutions engineer emphasized the importance of working with one vendor and one technology in an in-rack project of such a complex magnitude.

To begin with, ProSoft’s flow computer module makes for a single point of communication with tight programmable controller and flow computer integration on a compatible backplane. That translated into an easier learning curve for the system integrator and end user. Other benefits include:

When asked how ProSoft Technology might bring further solutions to such pipeline construction and development in the near future, the engineer said he was looking at ProSoft’s wireless radios as a cost-efficient, wireless solution for bridging data between pipeline block stations across South American rivers and gorges. He felt wireless technology could help deter costs in constructing cables between hazardous points as well as running costly cable between pumping stations that may only be 10 kilometers apart, well within the range of ProSoft’s wireless capabilities.

“A lot of projects are depending on this pipeline,” he said while simulating pipeline measurement stations with the AFC module at ProSoft Technology’s headquarters in Bakersfield, California. “With such professional quality in a job, we had to ensure the technology fit the needs of the overall project.”